Sernagiotto: The man who loves to race

“I am in love with motorsport, especially its history,” says a passionate Giorgio Sernagiotto from Cetilar Racing.

This isn’t just typical Italian tifosi-style passion coming out, this is a deep-rooted love of motorsport in all its pomp and colour.

The evidence is even in the colours of the No.47 Cetilar Racing Dallara-Gibson LMP2 entry which is making its full FIA WEC debut this season.

“I am one of the designers of the Cetilar Dallara livery because I love the story of motorsport and I like the 60s and 70s liveries in particular,” says Sernagiotto.

“When we started to draw this livery I thought about [Henri] Pescarolo in 1972/1973 in the Matra and I felt this could be a good idea, because the colour of Cetilar is blue and green as the Matra was. You remember Graham Hill, and Pescarolo they won in ‘72 the 24 hour of Le Mans, what great days.” The story of Cetilar Racing and its key founding father, Roberto Lacorte, has achieved in such little time is a story worthy of a fairytale. Yet it is one deep rooted in making highly analysed sporting and technical decisions also.

“For sure, this was my dream and now I’m here, it’s unbelievable,” says Sernagiotto.  “I met Roberto in 2010 and I began as his coach and we started this road to our dream. I worked for Roberto since and also with Amato Ferrari and we did the step-by-step approach towards racing in the WEC.

“We started with a touring car and then a small prototype, then LMP3 for two years with the ELMS until we stepped up to LMP2 in 2017. It was strange because I was a driver of Ferrari Challenge. He saw these races, which I won and he told me you know one of my dream is to drive a racing car. [I told him] you can do it and I can help you,” recalls Sernagiotto. “So we started together, and I called Amato and told him that one of my friends wants to drive a racing car and get to Le Mans and the WEC.

“At the end I spoke with Roberto about his potential because he is a really talented driver, in my opinion.

“He started to drive at 32-years-old, not normal, but he is a really, really fast bronze driver and after two or three years of preparation he could be very, very strong.”

But it is not just the WEC where the Cetilar ambition lies. As Sernagiottto describes there is also a framework being put in place to nurture new talent in the sport.

“I’m involved in a lot of projects with Cetilar,” he says. “We are helping also young talent in karting and I am the co-ordinator of this project, because I drove karting for 10 years back in the ‘90s where Andrea Belicchi was one of my teammates.

“This is when Andrea and I first met and now, when we step up to LMP2, I spoke with Roberto about Andrea and said I know the right person to help us.

“Andrea has ten years [experience] with Rebellion in LMP1/LMP2, and he is helping us to develop our skills. We have big work to do but we are enjoying racing on the world stage. It is where we want to be.” 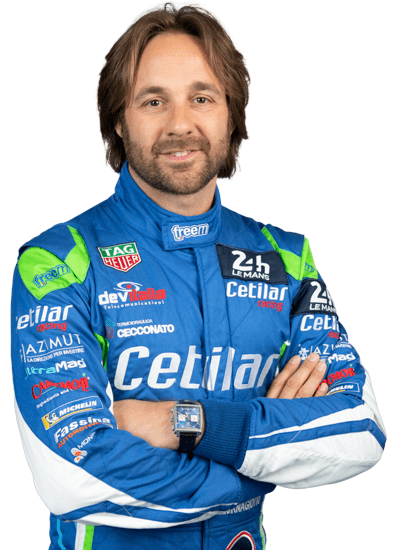