Getting to know: Darren Turner

As part of a regular “getting to know” series on FIAWEC.com, we spoke to several drivers across the LMP and GT classes to find out a little bit more about the men behind the helmets.

Second up in our series is Aston Martin Racing’s Darren Turner, below is what he had to say.

2.    If you could invite three people (dead or alive) to a dinner party, who would they be and why?
“Ricky Gervais, because he’s funny and my wife. Then also Neil Armstrong because I would love to talk to someone who lived around that time, living the experience that he did, when it was all trial and error.  They were incredibly brave - bolting themselves into a rocket and firing themselves off into the void! Back then when they didn’t have all the technology that we have now... it’s amazing to think about what they did.”

5.    Can you tell us something that we wouldn’t know about one of your team-mates?
“Jonny [Adam] doesn’t like crisps. He has a phobia of crisp packets.”

6.    If you could be a professional at any other sport what would it be and why? Similarly, if you could attend any sporting event in the world that you haven’t already been to, what would it be?
“Golf, because I am not very good at it and I love walking! I would also love to be ringside at a world heavyweight boxing match.”

7.    Do you have any weird habits?
“I salute magpies when I see them, as a superstition. I was once doing a test in a Formula First and I saw a magpie just as arrived at Druids (at Brands), I saluted it and then I went off.”

Missed our getting to know Sébastien Buemi story? Catch up HERE. 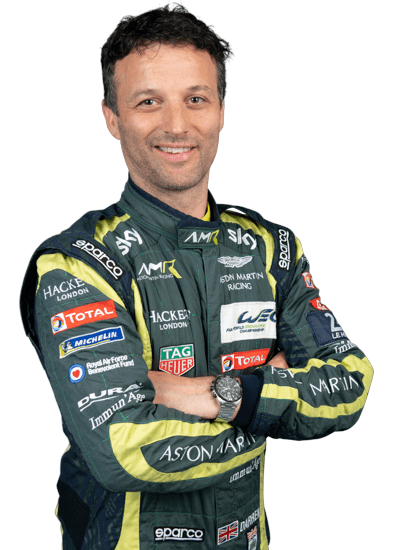 Previous news
Feeling the heat at the 24 Hours of Le Mans
Next news
LM24: What the drivers said post-race